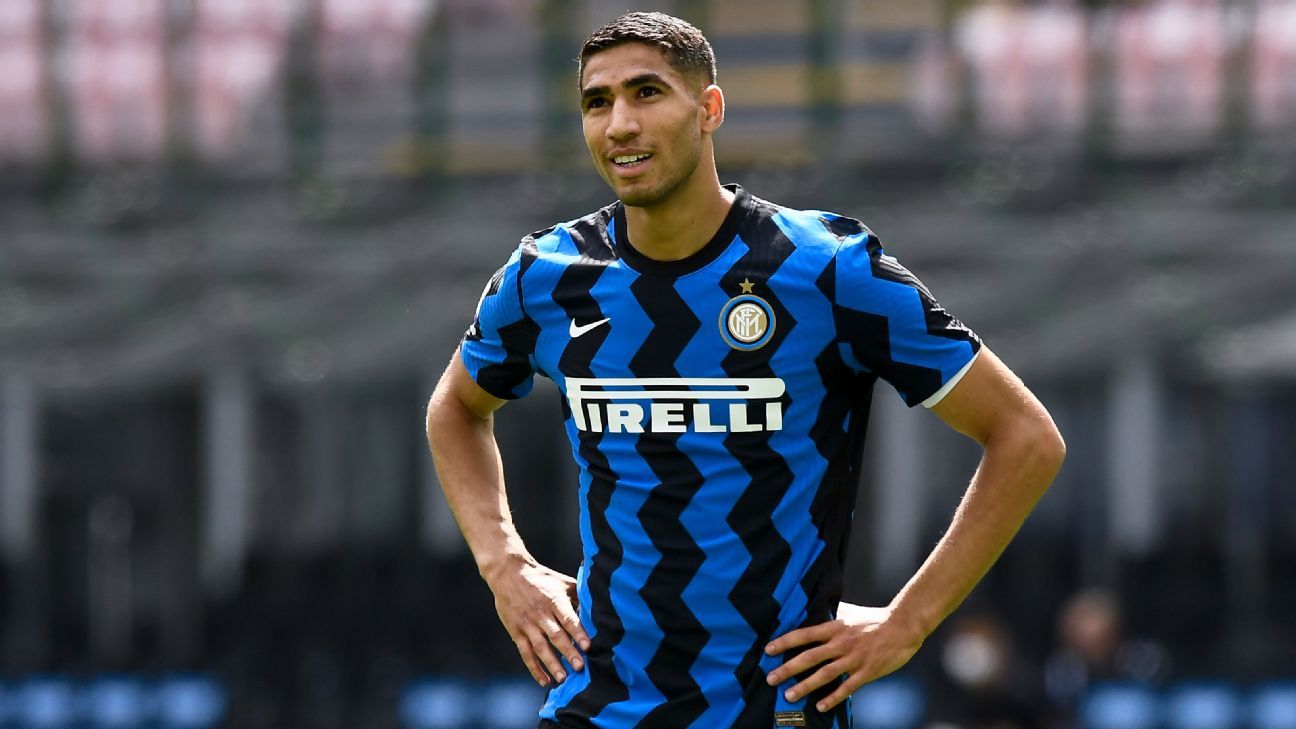 With most of the major European seasons now complete, the rumour mill has been sent into overdrive as clubs ponder their moves ahead of what will be a busy transfer window. Check out the latest gossip below, and see all official deals here.

Chelsea are rumoured to have matched Paris Saint-Germain‘s offer for Internazionale wing-back Achraf Hakimi, and the Italians are said to favour the Blues’ proposal, according to Sky Sports Italia.

The offer from both clubs for Hakimi is for a fee of around £56.1 million, which falls short of Inter’s valuation of nearer to £70m. However, Inter are interested in Chelsea duo Emerson Palmieri and Andreas Christensen, who could both be offered in exchange as part of the negotiations.

Inter are said to be particularly keen on Palmieri on loan, though Chelsea would prefer the move to be permanent.

The 22-year-old joined Inter from Real Madrid last summer for a fee of around £40m and was an influential part of the club’s Serie A title-winning season.

Hakimi can play as a right-back or wing-back, the latter suiting Chelsea boss Thomas Tuchel’s system of playing a five-man backline.

– Tottenham Hotspur appear to be edging closer to their first signing of the summer, Borussia Monchengladbach forward Marcus Thuram. That’s the view of RMC Sport journalist Mohamed Bouhafsi who says that the German side are begrudgingly willing to allow their prized asset to leave following their failure to quality for Europe next season. Thuram has scored 25 goals in two seasons in Germany.

– Manchester United goalkeeper David de Gea is not only staying in Manchester next season, he’s expecting to be the Reds’ No. 1, according to the Sun. The 30-year-old Spaniard had a mixed season in 2020-21 and battled it out with Dean Henderson for a starting place in Ole Gunnar Solskjaer’s starting XI, and he was at one point rumoured to be on the verge of an exit from Old Trafford. However, De Gea believes his future remains in Manchester.

– Arsenal have been offered former midfielder Aaron Ramsey by Juventus, with the Italian giants keen to take Hector Bellerin in the other direction, according to Sport. They’re reporting that Ramsey could be in line for a stunning return to north London after leaving the club in 2019. He has made 65 appearances since, but Juve are keen to freshen up their squad and bring Bellerin to Turin.

– Atletico Madrid have rejected an offer from Manchester United for right-back Kieran Trippier, according to Football Insider. United have made a formal bid of £10m for the 30-year-old but have been told they will need to increase their offer if they’re to have any chance of landing the England international this summer.

– Jose Mourinho’s Roma are closing in on a deal for Granit Xhaka from Arsenal for around £15.5m, according to Corriere dello Sport. The former Gladbach midfielder has been linked with the Italians for a number of weeks and it appears as though the Giallorossi are close to finally landed the 28-year-old. Xhaka was a divisive figure among the Gunners’ fan base, but Mourinho will feel he’s getting a midfielder in his prime. Arsenal are believed to be chasing Ruben Neves from Wolverhampton Wanderers in an effort to bolster their own squad.